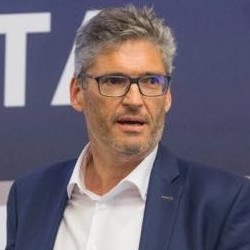 Peter Jacobs has been working for the EIB since 2000. He started as a Senior Loan Officer and Deputy Head of Benelux Division in the Operations Directorate and focused on debt underwriting across the public, corporate and banking markets in the Benelux.

From 2008 to 2011 he worked as the Head of Western Europe Implementation Division. From 2011 to 2016 he headed the Structured and Project Finance Division of Western Europe (IRL, UK, FR, B, NL, Lux). This division has been a leading multi-billion euro underwriter of greenfield transactions in its markets and a prominent contributor to EIB/EFSI in 2015 and 2016.

In November 2016 he became the Head of EIB’s office in Ljubljana, Slovenia, and in May 2018 Peter was appointed Head of the Investment Team for Greece (ITG) in Athens.